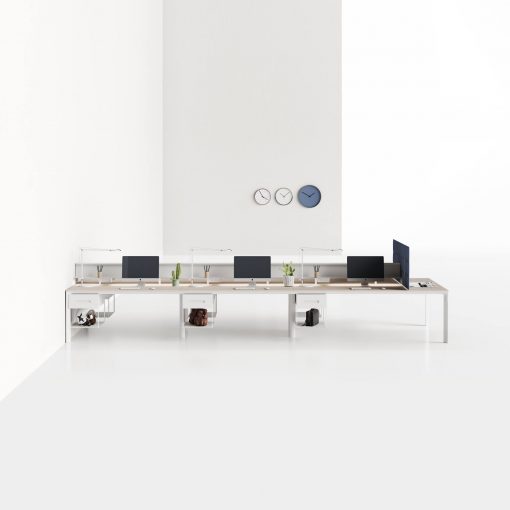 An office furniture system, characterized by a strong research directed towards the combination and coexistence of the performance needed in the work environment with an aesthetic language able to reside in both working and domestic settings.
An object with very high performance that presents, at the same time, an original, young, fresh and domestic image.
The final result is an operative desk series characterized by a light and contemporary aesthetics, a slim plane leans on top of a fleeing structure adorned by connection elements that, starting from the beams, evolve to embrace the table legs.
The accessories completing the system resume and take to the extremes the light aesthetics theme, working whit slim metal plate and framed volumes.
The aesthetics choices, as well as the domestic like material selection and hidden and unexpected structural elements, give to the system a versatility of language that makes it adapt to be put in architectonic environments that present very different peculiarities.

Progetto CMR is a company specialized in integrated design, founded in 1994 and led by Massimo Roj, with the aim of creating a flexible, efficient and sustainable architecture. With 12 offices worldwide, and more than 150 architects and engineers, Progetto CMR carries out different scale projects combining an experimental dimension and a multidisciplinary expertise. Since 2010 it is among the top 100 design firms in the world reported by BD World Architecture Top 100. Giovanni Giacobone, architect and designer, directs and coordinates the Industrial Design Division of Progetto CMR since 1999, flanked by Matteo Colombo, creating home and office products that integrate design, technology, functionality and environmental sustainability. The quality of the work done in the design field has been honored with several awards, such as the Red Dot Award 2016, IF Design Award 2016, LUX Middle East Award 2016, ADI Design Index 2003, 2004, 2006, 2014, Grandesign 2004, the Good Design 2008 and 2010.